← Introducing the New Face of Awesome in Action!
Love Your Author Festival! → 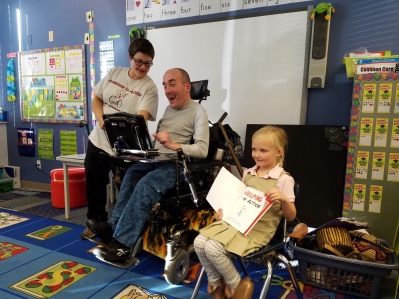 Here’s a repeat link on the Apostrophe Magazine article, “Storytelling genius writes children’s books” about Nick, his life growing up in Ethiopia, and Awesome in Action’s work and mission.

If you are not subscribed to Apostrophe Magazine (a subscription we highly recommend!) You can read the 2 part article below:

Ask Nick Roussos to describe himself, and he’ll tell you that as an outdoor enthusiast, he is a “total thrill seeker.” He loves almost any water sport, including water skiing and white water rafting. 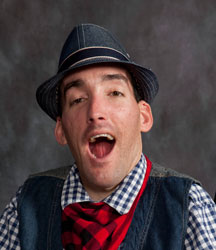 His love for the water was passed down by his family. Big into the outdoors, they spent a significant amount of time at Lake Langano when he was a kid.

Lake Langano is in Ethiopia. Now 40, Nick was born and raised there until he was 15-years-old.

“I love water sports to this day,” Nick said. “Well, almost all of them. I am still a maybe on canoeing!”

Now in Loveland, Colo., he continues his activities in and out of the water, to include triathlons. He also hits the ski slopes during the winter and sits horseback every now and then. 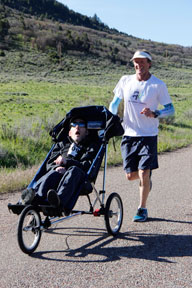 Nick Roussos participates in triathlons with Athletes in Tandem, a non profit organization that competes with athletes who have a disability to enhance the quality of their lives by racing together in running, biking, swimming and triathlon events. He’s pictured with his friend Dennis Vanderheiden, president of the organization. self – while using adaptive gear.

A different way to do things

Born with cerebral palsy, Nick is limited in his movement and is unable to speak. In an email interview with ApostropheMagazine.com he said, “I’ve never let that stop me.”

To get around, he rides in his “flaming hot-rod” wheelchair and talks using PRC’s Eco2 electronic communication device.

Growing up in Ethiopia, though, Nick didn’t have these devices. He often got around on his brother’s back or his mom’s hip. And had a special way to communicate with his family.

“My mom’s special therapies helped me gain many abilities,” he said. “I was always doing them.”

Today Nick still relies on his family and his job coaches to help him with personal care and his business (learn more about his business in part two next week). He’s grateful for what they do for him.

Sometimes, though, he wishes he could feel just a little more independent.

“I often feel my voice is not heard,” he said. “I have difficulty communicating and being treated like an adult.”

But again, he doesn’t let that stop him.

Nick has a genuine interest in living his life to the fullest. He advocates for himself and others by showing that people with all kinds of abilities can do great things.

Family connection, living in Ethiopia and spending a lot of time in the outdoors has given Nick Roussos the wonderful gift of having plenty of interesting stories to tell.

To share his storytelling gift, he’s worked hard to overcome the feeling of being disconnected. A man who loves to laugh and meet new people everywhere he goes, Nick expresses himself by writing children’s books or speaking to audiences using his Eco2 assistive device.

Nick Roussos brings his presentations on the road and often talks to elementary kids. 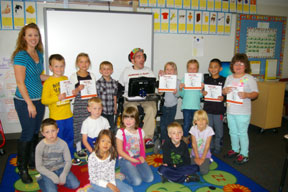 His message is all about encouraging people to go for their dreams no matter their circumstance.

“I love to spend time with children, and in the schools,” Nick said. “ I like to make people happy, and help them realize his or her potential.”

Through his book and speaking engagements, he developed a business called Awesome in Action.

Awesome in Action was named one day as he water-skied with a friend who’d never seen him ski before. Nick said his friend screamed, “‘Nick! You’re awesome in action!’

That was the beginning of it all (Read part one to learn about Nick’s outdoor adventures here). 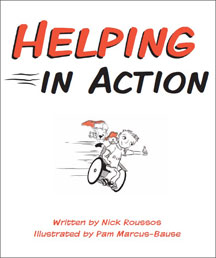 His first venture as an entrepreneur was writing a children’s book. The book, Helping in Action, was inspired by his childhood in Ethiopia.

“I had a fun childhood…so I wrote a children’s story about it.”

Released June 2014, the main character is based on Nick, depicting a boy with cerebral palsy and his pet lion cub, Sandy.

A true story – back then – “I thought everyone had pet baby lions,” he said jokingly. “That is clearly not true in Loveland.”

Nick is getting ready to release his second book also inspired by his life in Ethiopia sometime this year. But getting out and talking to people is also just as important to him.

With the help of his job coaches, Nick has prepared different presentations for different audiences, using his Eco2. He likes being around kids best. Often he visits and talks about  the R word. Looking to inspire, Nick shows how he lives his life to the best of his abilities.

In front of an audience

Most recently, he gave a multimedia presentation at the Ted X Front Range event in Loveland, Colo.

Although he was nervous on stage, he said, “I love a good party! That experience was so exciting.” 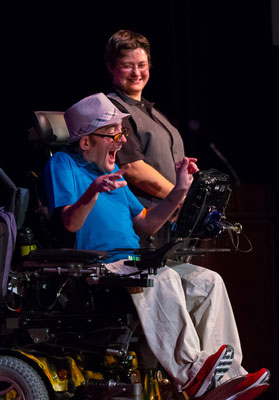 With the help of his job coach, Audrey Hendricks, Nick Roussos gave a TEDx presentation.

“Whether adults or children, listening to a guy talk who cannot speak a word creates a bit of a stir,” he said.

Programmed into his Eco2 are one-word responses, or he uses made up signs that are reminders of what he’s thinking from stories about the past.

Audrey Hendricks is one of Nick’s job coaches who helps with all aspects of his business, including communication.

“A lot of the time, my job is to interpret information so that he understands, and then ask for his responses,” Audrey said.

Opening the eyes of many to show a way they’ve never seen before, Nick and Audrey found that both kids and adults respond to him similarly. They’re hesitant at first.

Then “They want to touch my speech device and make it talk, and they want to use the joy stick on my chair,” he said.

Whether it’s through his book or through his presentations, Nick hopes every audience knows that he’s a cool guy who leads a good life.

“I hope they learn that we do not have to be limited by our circumstances, even if you ride around in a flaming hot-rod wheelchair.”

Find out what “crazy things” Nick is up to or purchase his book here.

Sparking a shift in thinking about abilities!
View all posts by AwesomeinAction »

← Introducing the New Face of Awesome in Action!
Love Your Author Festival! →